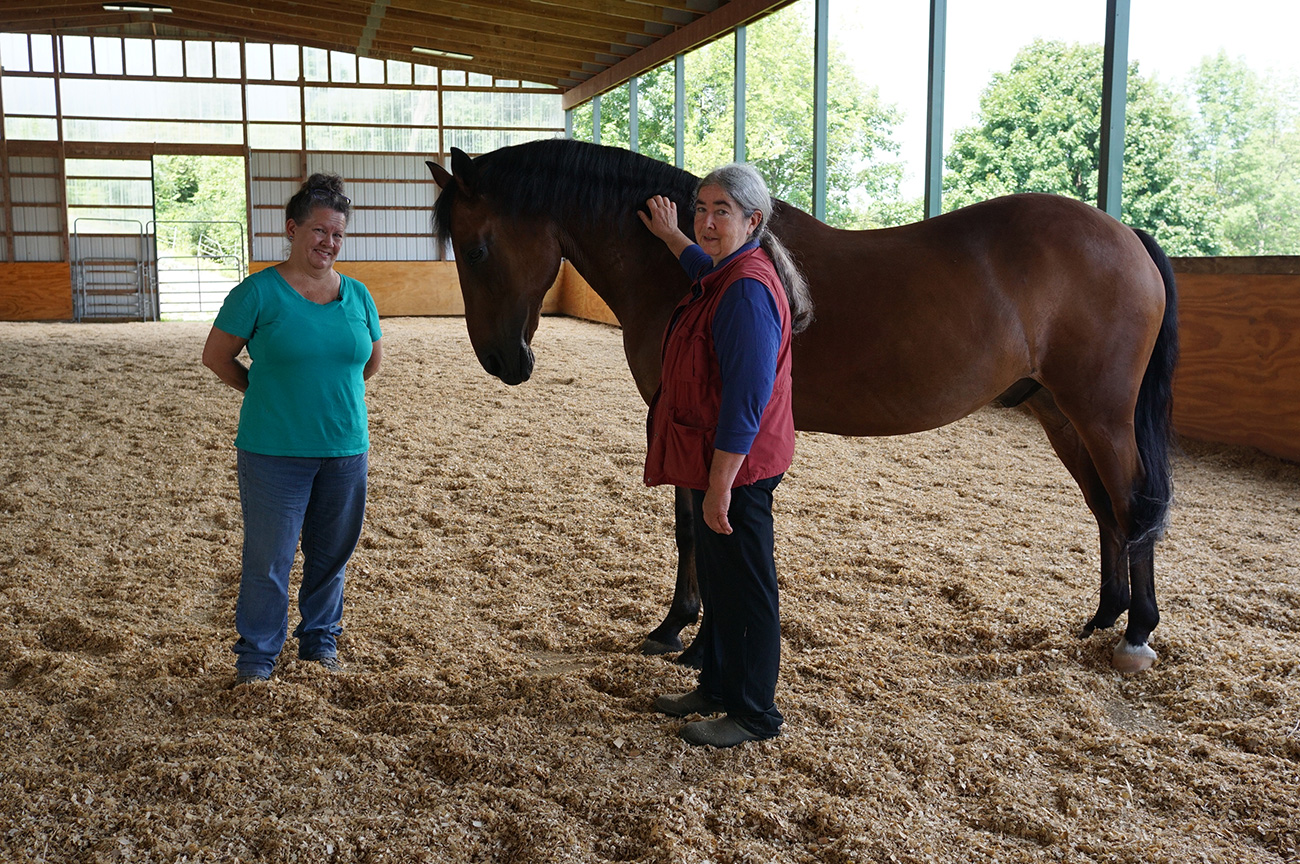 Alexandra Kurland and Her Horses

In the barns where you have visited horses, it’s likely the horses have been in stalls or behind barriers, safely separated from humans to a great extent.  It’s smart to use barriers for protection because horses are big and capable of hurting humans, doing damage with their hooves, teeth, or even by using their large bodies to slam into people while trying to get away or when trying to make humans leave them alone.  But what if the horses are trained to behave in ways that make it safe for them to roam freely in the barn? Safety for humans can be achieved by using the principles of behavior science to train horses to control themselves so they don’t have to be controlled by gates, fences, and equipment.  The fundamental behavior principle of positive reinforcement can provide confidence and a sense of security for horses when they have the option to choose an approved behavior like standing quietly in a particular spot. If a horse is frightened or doesn’t understand what someone wants from him, walking away to engage in a known trained behavior is a good choice when you consider the alternative of dangerous defensive behaviors.  Training can provide horses with a host of behaviors they can choose, like going into a stall, standing quietly in a particular spot away from people, or assuming a specific position upon the approach of a human. Of course, stalls and fences, trailers, saddles, bridles, halters and lead ropes are not out of the picture. These things are always needed, and trainers can use behavior science to teach horses that they guarantee treats and attention and other good things for them.

When a visitor approaches Alexandra Kurland’s barn, she is invited to open the gate and enter, even though horses may be standing nearby.  The horses won’t escape or crowd the visitor; they are trained to back up and provide space for humans to enter the barn. What a great idea!  In some barns, horses are pushed or shooed away. Through training with behavior science, Alex has given the horses the tools to volunteer to move away and provide space for humans walking in.  It is important for horses to provide space because of their size and how easy it is for them to bump people, knock them over and injure them. When one is walking down Alex’s barn aisle and horses are standing around, they move backward or over to the side, simply because a human is approaching; no words are spoken, no hands reached out to touch them or “push” them out of the way.  It is almost magical to see a horse walking backward as you walk forward, moving to the side of the aisle for you to pass, all on its own.

Alex’s horses are taught to stand quietly with their heads held directly in front of and close to their bodies while people are visiting near them.  The horses are allowed to stand near humans grouped in a conversation circle because they control themselves. They do not grab for food in people’s pockets, they don’t nudge people or wag their heads around, forcing humans to dodge being hit by giant horse heads.  They don’t nibble or bite, or even put their heads near the humans. They have been carefully taught to provide the space that’s needed for humans to feel secure and not have their conversation interrupted by a nosy horse. They probably enjoy the close interaction with humans, and are allowed to participate because they can do so safely.  Positive reinforcement has built this routine. The horses can stand together around Alex as she feeds them tasty treats like watermelon on a hot day, politely waiting their turns because they have been trained to stand politely in a group with people and other horses. They can even follow Alex around with her wheelbarrow as she picks up piles in the arena, stopping while she does the work, then moving to her next stop and waiting patiently for her to complete the chore. They never crowd her or become pushy, and they get a treat now and then for their polite behavior.

Alex enjoys riding horses and training them in groundwork to teach them the skills they need to be controlled by verbal cues while being ridden.  She teaches them through training exercises in the arena on long lines or at liberty (no lead rope) that are largely games, allowing them to make choices and reinforcing the ones she likes.  She trains them to walk up to a mounting block to be mounted, to walk, trot, canter, and other gaits on verbal cues, and to push their heads into halters and bridles. The horses lead from either side, in partnership with a handler.  They load into trailers on cue and with grace when necessary. They stand quietly to have their hooves cared for; they lift and offer each foot as requested and hold it supported on her leg during the process. No force is used or needed as the horses are willing participants in whatever Alex wants to do with them, all because positive reinforcement and behavior science are used in their training.  Beginning with the smallest bits of behavior, positive reinforcement builds skills and routines that make horses safe and pleasant to be around as well as great riding partners and performance animals.