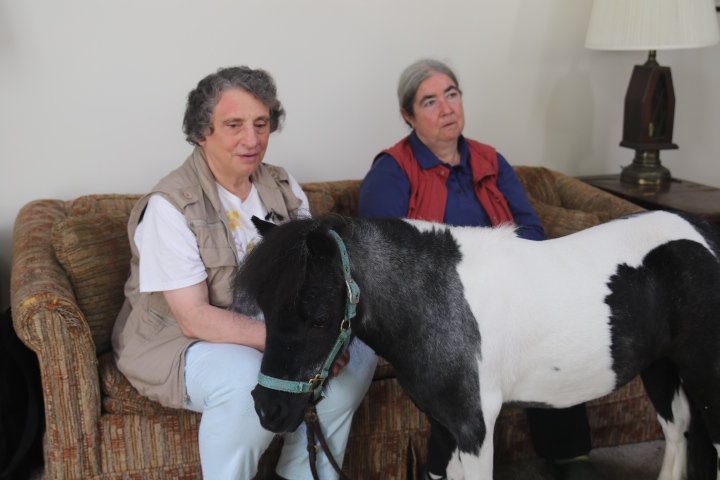 After B.F. Skinner discovered operant conditioning, the way animals learn new skills by getting something they want as a consequence of what they choose to do, he couldn’t help but use positive reinforcement to teach his daughters.  Animals and children alike eagerly volunteered to learn and the sunny attitudes they displayed during the learning exercises showed they were enjoying learning, making positive associations with all the stimuli involved in the process.  His daughter, Dr. Julie Vargas, learned at B.F. Skinner’s knee how to teach humans using a behavioral approach. Though Julie understood the behavioral approach to teaching, she didn’t encounter behavior in her studies as a student of education until she reached graduate school.  Even today, many teachers graduate from universities and become certified with no input about behavior science or how learning takes place. One of Julie’s impacts on the world of education has been teaching behavior science to groups of teachers in university courses and in continuing education workshops.  Behavior science, commonly known now as behavior analysis, filled the gaps in traditional education and helped teachers solve classroom problems and improve their students’ learning.

One of the tools Julie Vargas used in every class she taught was Precision Teaching, and she advocates for its continued use in classrooms.  Precision teaching was developed by Ogden Lindsley, one of B.F. Skinner’s students. Lindsley saw a gap between the possibilities offered by behavior science and the traditional ways students were taught in the classroom.  Traditional teaching tended to offer a large buffet of information, allowing students to take what they would. Behavior science had already shown how to select behaviors to develop and how to actually create completely new behaviors through shaping.  Lindsley knew behavior science could provide a way for teachers to see exactly which skills each student needed to improve, teach them directly, and precisely measure improvement.

Precision teaching helps students participate in their own learning.  A big topic is broken down into tiny pieces so students repeatedly demonstrate specific skills.  They track their results on graphs that show their progress. Though students may be bored by long lectures, they are excited about showing off their skills during very short, timed exercises.  Teachers create worksheets and present them much like a game in which students show what they can do at their current level of understanding of a topic. Students can focus completely when the required time period is short.  There are no wrong answers and there is no punishment, as the students are merely demonstrating how fast they can do tasks they’ve learned. By doing so, they increase their abilities. They develop the skills they need to a level of fluency, where the results flow from their brains to their fingers and onto the paper at a high rate.  The learning is quick and the progress is measurable on the simple graphs that students track themselves. The responsibility for tracking is transformed into immediately recognizable progress, reinforcing what the students have done well and motivating them to do more.

If it sounds simple, it is!  Precision teaching is just one way behavior science is used in the classroom.  It is a proven way to teach the basic introductory information in any area of study to any student because teachers provide the activities at the student’s level and increase difficulty as they progress.  Learning to perform fundamental skills correctly and at a high rate of speed allows students to build higher thinking skills on a solid foundation. Behavior science helps teachers of children of all ages to excel, using their time and other resources efficiently to produce great educational results.

Why isn’t behavior science a part of every teacher’s education?  Ann Edie became a teacher through a university program that did not include behavior science.  She was a good student, excelling in the classes required for her teaching degree. She had also trained dogs and learned on her own to reward good behavior from dogs by giving them things they liked.

In a similar way, Ann taught another family dog to lead her around the neighborhood, functioning in some very simple ways as her first guide dog.  Ann is blind. Her blindness and curiosity motivated her to find innovative ways to explore the world around her. Her love of animals kept pointing her to having one with her, helping her if possible.

As Ann moved through life, she continued to figure out ways to address her own challenges with being blind.  She continued to train her own dogs and began riding and training horses. When she became a teacher, she began to see places where using positive reinforcement to train dogs paralleled opportunities with teaching kids, even though she was not taught behavior science as part of her study of education.  In her master’s program in Special Education, she was exposed to behavior science from the aspect of exploring problem behavior from an antecedent – behavior – consequences approach. However, it was not fully developed as a way of teaching, in which antecedents provided by the learning environment can be rearranged and positive consequences targeted to specific behaviors to increase them.  Educators seemed to have the general idea of what might be happening, but had not yet learned that they could manipulate the situation to help students learn new behaviors.

When Ann started teaching in the 1990s, teachers were using tokens in the special education classroom.  Teachers would give tokens to students seen engaging in desired activities by dropping them into the student’s bank on his or her desk.  Later in the day, the students would carry out a counting activity to determine how many tokens they had and choose a reward depending on the number of tokens they had.  One of the problems with this use of tokens in the classroom was that specific criteria for behavior were not usually defined, so teachers were often subjective in giving tokens.  It was a good start, but they did not have a full understanding of all behavior science had to offer them in teaching.

After learning about behavior science through training dogs and horses, Ann realized she could define specific behaviors she wanted to increase for specific students.  She would give tokens for a specific behavior and help students build the skills of that one task. She added another innovation to the use of tokens in the classroom – she used a plastic cup so each dropped token made a noise and provided secondary reinforcement for the students’ behavior.  This is similar to how she was using a clicker as a secondary reinforcer in training animals; the sound predicted something good was coming for the animal and now for the human student also. She took time to find which activities were reinforcing to each student, rewards that students were willing to do something to get, and they traded their tokens for those privileges.

Ann had a young student who incessantly drummed on his desk with his fingers, distracting himself from doing his work and disturbing his teacher and the other students, making it hard for any of the students to learn.  She used the opportunity to drum on his desk as a reinforcer for doing a small amount of schoolwork, and was able to help the boy increase the amount of work he did before getting his opportunity to do the drumming. This is in contrast to the approach other teachers took, which was to punish the boy for drumming, for “failing to control his behavior.”  He was considered a behavioral problem, but by viewing this from a behavior science perspective, Ann was able to discern how to use the “problem behavior” to motivate the student. As a result, the boy, formerly marked as difficult, and therefore less likely to succeed, developed a good habit of completing his work before engaging in other activities, and the other students could have a quiet atmosphere to do their work.  Ann used reinforcement in many situations just like this one throughout her teaching career.

Learning about operant conditioning through animals led Ann Edie and many others in our film and in the fields of education and behavior analysis to use reinforcement with humans.1 This resulted in huge strides in the education of developmentally disabled adults and children, and students in general.  The principles of learning apply to humans and all animals and can offer dramatic improvement in worldwide education.